In recent years, with the rapid development of China's auto industry, auto parts also show a rapid growth rate of more than 30% per year. As an important form of improving the innovation capability of parts and components companies, transforming the mode of economic growth, and enhancing international competitiveness, the parts and components industrial base has risen in various places and has received strong support from the government.

From one time to one year, the reporter made a special trip to Baoding, Hebei, where the Great Wall, Zhongxing, and Chang'an buses are located. He witnessed this state-of-the-art parts and components industrial base in full swing. A Kama light truck loaded with sandy soil galloped through Dongsheng Road and dragged a long dust behind it, so that the workers on the roadside eating the board hurriedly blocked his bowl.

The so-called â€œGreat Wall siteâ€ that was owned by Wangâ€™s boss was part of the National Automobile and Components Export Base that had just passed approval last year.

The reporter learned that the Great Wall, as a leading local enterprise, has assumed the role of â€œpioneerâ€ in the construction of the parts and components base.

"The construction began in March last year." Meng Kechang, who is in charge of infrastructure at the construction site, told reporters: "The Great Wall has more than 500 acres of this parts base, including three items: transmissions, automotive lighting, and automotive stamping parts production. The main project of the transmission project with an investment of 700 million yuan and an area of â€‹â€‹more than 40,000 square meters has been completed, and it is expected that it can be put into operation by the end of the year. After the production, the annual output of 200,000 transmissions can be achieved."

Subsequently, the reporter came to the transmission plant located in the southeast of the base. Here, the reporter found that the factory building has been basically completed. Some equipment, such as CNC gear presses and five-speed driven gear production lines, are already in place and are waiting to be installed. Rao Wei of the transmission project team is leading some workers to carefully debug some of the machines. In order not to affect his work, he kindly rejected the reporterâ€™s interview.

However, the reporter here still found some records of the work site. A table of â€œinstallation and debugging problem points summaryâ€ of a certain equipment was placed at the entrance, and most of the items were marked with â€œOKâ€ at the end. According to Zhang Wei of the transmission project group, "The machines are now installed after the ground trim is completed, and production will start soon."

Synchronized construction with the transmission plant is a car lighting plant located on the southwest side of the base. Due to construction reasons, the reporter failed to enter the interior of the factory. However, the reporter learned that this investment of 240 million yuan, can be an annual output of 250,000 sets of automotive lighting workshop plant main project has been completed by the end of June next year is expected to be completed and put into production.

At the same time, plans to complete the stamping shop in the northeast corner of the base. The investment of more than 700 million yuan in the plant is expected to produce 80,000 sets of automotive castings.

"We have to do 10 hours a day." A pipeline expert told reporters, "But in order to guarantee the progress of the project, we often start work at 7:00 am until 7:00 pm." "You can earn four in a day." , fifty dollars, can be considered." The master smiled and continued to work in his hands.

According to report, the parts and components base in Jiaozhuang Development Zone covers an area of â€‹â€‹2,600 mu, with a total investment of 5.5 billion yuan. It includes not only the transmission production plant, automotive stamping parts production plant, but also engine components, 300,000 yuan. A total of 12 projects including automobile brake production plants. Among them, the first-phase project of the Great Wall Auto Sedan Engine Project located on Chaoyang South Road, South Second Ring Road, invested more than 700 million yuan and covers an area of â€‹â€‹30,000 square meters. It was completed and put into production on May 13 this year.

In fact, Baoding is only a microcosm of the country's spare parts base.

In recent years, China's auto parts industry has grown at an average annual growth rate of more than 30%. In 2007, China's auto parts sales revenue was approximately 724.683 billion yuan, an increase of 37.45% year-on-year. In order to improve the overall quality of China's auto parts and encourage exports. The country has established 12 "automobile and parts export bases" nationwide. "The guiding ideology for the establishment of a national-level automotive and parts export base is very clear. It is to build an export base into a base for independent innovation in China's auto industry and become a platform for international exchanges and cooperation in the automotive industry." Someone in the industry thinks so.

In July last year, Baoding was listed as the second batch of national auto and auto parts export bases. At the same time, Great Wall has also become an export base company. As an important "backbone" of the Baoding automotive industry, Wei Jianjun, chairman of Great Wall Motor Co., Ltd., when he visited the parts and components base, said: "As the vehicle specification continues to increase, it is imperative to vigorously develop the parts and components industry."

Mobile Container Truck Ramp is cargo handling and forklift with auxiliary equipment to use, adjustable height according to the level of automobile car.

Truck directly through the device into the interior of the bulk cargo handling, only a single person operation, you can achieve rapid loading and unloading of goods by the Electric Adjustable Forklift Container Yard Ramp Leveler. 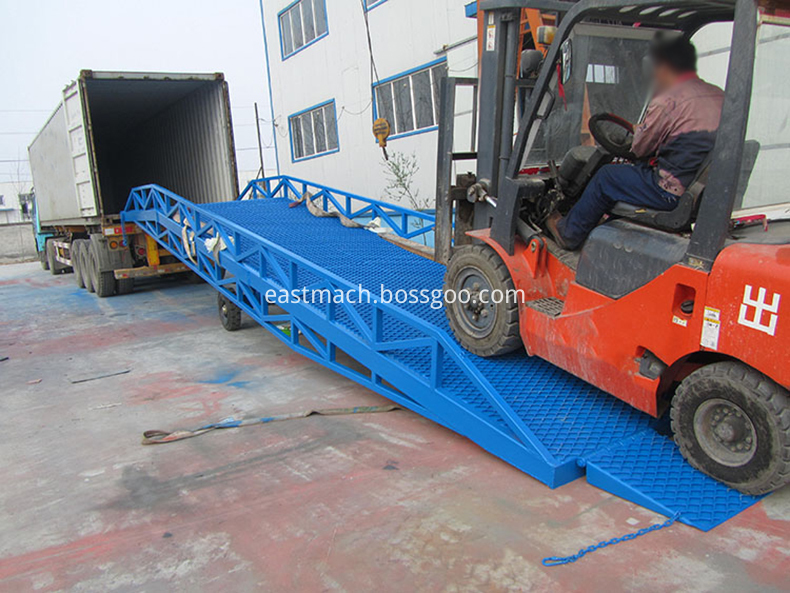 If you have any questions, please contact with us directly. Mobile Container Truck Ramp are produced with High Quality and Good Appearance. Welcome you can visit our Factory. For inqury, Please send mail directly to us.